Our Gucci at the CRUFTS, the largest dog show in the world 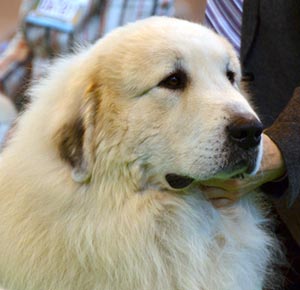 Our big white dog Gucci du Val de Pyrène came out 4th in open class (which corresponds to the "Classe Champion" in Great-Britain), at only the age of 2, amongst the greatest Champions in the world. 78 Great Mountain Dogs were running in this competition.

It was a very fulfilling experience that sent Gucci among the Greats in his breed.

We are very proud and happy that his value has been acknowledged by a connoisseur of the breed, Mr Spencer-Brown, Membership Secretary PMDC of Great Britain.

Given the size of this show (the largest dog show in the world!), large rings were set in accordance with the size of the dogs. 21 dogs of this class entered one at a time in the ring, so each owner had the opportunity to show his dog in the best conditions and so the judge can observe the animal in a suitable way. 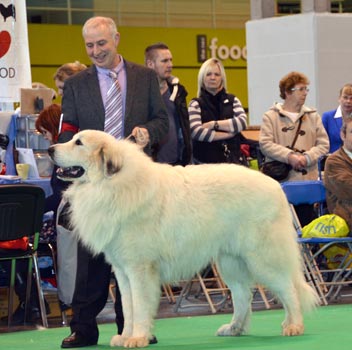 After the 1st selection, some dogs were asked to leave while the selected others went back on the ring to do a « round trip », then a full circle around the ring and a static stand. It's only then that the judge gave his final rating.

It is a well deserved reward for our Gucci and above all for all the work we try to accomplish with honesty and seriousness.