Breed Standard of the Pyrs 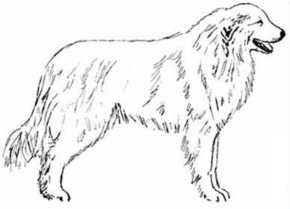 A Breed Standard is the guideline which describes the ideal characteristics, temperament and appearance of a breed and ensures that the breed is fit for function.

A powerful and imposing dog with a certain elegance. Great size, strongly built but not cumbersome.Well balanced and of noble bearing.

Strong head without coarseness, not too large in relation to size of dog. Skull curved when viewed from front and sides. Breadth at widest point about equal to length from occiput to stop. Head as viewed from above forms a blunt ‘v’ shape, well filled in below the eyes. Sides nearly flat and of good depth. No obvious stop or excessively protruding eyebrow ridges; only a slight furrow, so that skull and muzzle are joined by a gentle slope. Strong muzzle, medium length, slight taper near tip. Black nose and eye rims. Liver or pink pigmentation highly undesirable.

Broad, muscular loins, fairly prominent haunches, slightly sloping rump, topline curving smoothly into tail. Strong, well muscled thighs tapering to strong hocks. Stifle and hock of medium angulation seen from side. Strongly made double dewclaws on each hindleg; lack of this identifying characteristic totally undesirable. The hindfeet may turn out slightly but the legs themselves must be straight.

Tail Thick at root, tapering gradually towards tip, preferably slightly curled; reaching below hocks, thickly coated with fairly long hair forming attractive plume. Carried low in repose, with tip turned slightly to one side. Tail rises as dog becomes interested: curled high above back in a circle if fully alert.

Very free, unflagging and never ponderous. Unhurried, driven by powerful hindquarters. Moving well within its capacity, yet able to produce bursts of speed. Tends to pace at slow speeds.

(b) White with patches of badger, wolf-grey, paler shades of lemon, orange or tan. The colour patches may be on the head, ears or base of the tail and few permissible on the body.

Other colours undesirable: black patches going right down to the roots highly undesirable.

Minimum shoulder height: dogs: 70 cms (27½ ins); bitches: 65 cms (25½ ins). Most will considerably exceed this, great size is essential provided type and character are retained. Minimum weight: dogs: 50 kgs (110 lbs); bitches: 40 kgs (88 lbs); these weights apply only to specimens of minimum height, taller ones should be heavier. Weight always in proportion to height, giving a powerful dog of great strength, but excess weight due to fat undesirable.

Any departure from the foregoing points should be considered a fault and the seriousness with which the fault should be regarded should be in exact proportion to its degree and its effect upon the health and welfare of the dog and on the dog’s ability to perform its traditional work.

Male animals should have two apparently normal testicles fully descended into the scrotum.

Save
Cookies user prefences
We use cookies to ensure you to get the best experience on our website. If you decline the use of cookies, this website may not function as expected.
Accept all
Decline all
Read more
Analytics
Tools used to analyze the data to measure the effectiveness of a website and to understand how it works.
Google Analytics
Accept
Decline